BSG Security Firm Mural Is Out Of This World 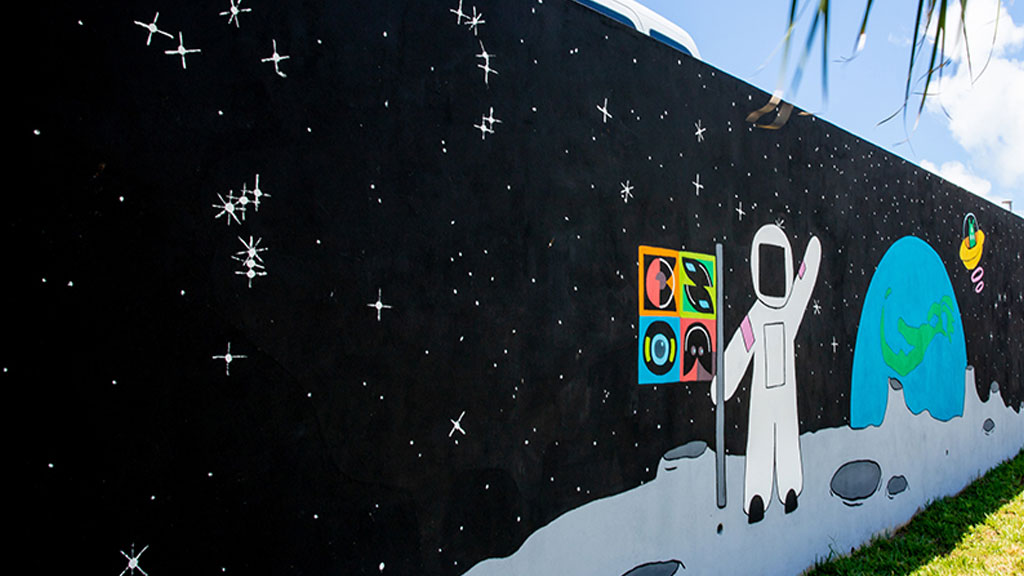 A mural celebrating the 50th anniversary of the Apollo 11 moon landing can be seen on the premises of the Bermuda Security Group, thanks to a project launched in partnership with the Bermuda Society of Arts and local schools.

A spokesperson said, “When the Bermuda Security Group [BSG] was founded in 1969, the world was abuzz with the breakneck pace of technology and innovation. Space exploration had captured the world’s attention when on July 20, 1969, Neil Armstrong made the historic ‘leap for mankind’ by becoming the first man to step foot on the moon.

“Bermuda itself played a role in the transformative mission, with the NASA tracking station supporting both the launch and earth orbit phases. BSG will commemorate both anniversaries with the launch of a multi-year public art project.

“Fast forward to 2019, in the fiftieth anniversary year of the company, BSG enjoys a brand new facility on the edge of the city directly across from the Bermuda High School for girls. As a tribute to the anniversary and as a welcome to its new neighbours, the President, Herman Tucker launched an annual public arts initiative in partnership with the Bermuda Society of Arts and local schools.

“From Vehicle Fleet Management to Offender Monitoring Systems and Life-safety systems such as medical alert devices, GPS is a critical space-enabled technology for the business of security and beyond.”

Our Security Officers provide a valuable addition to your home security.

Uniformed Officers
Our uniformed officers provide your home with a valuable security presence. They can provide an additional layer of security while you are away or on holiday, and significantly lower the risk of an intrusion at your property. We’ve used many years of experience to create exceptional Physical Security services when it comes to protecting your world.